This QL+ Team from Cal Poly was tasked with creating a prosthetic hand for QL+ Challenger who is a Navy SEAL.  He lost his left hand (past the carpels) in a training accident.  The amputation makes it difficult to execute his job of training SEALs and other military personnel to shoot and reload pistols and long guns.

The goals for this project were to create a prosthetic that will assist him in performing the following tasks as if he had two hands: firearm reloading; shooting; and, other associated movements necessary for a military trainer. 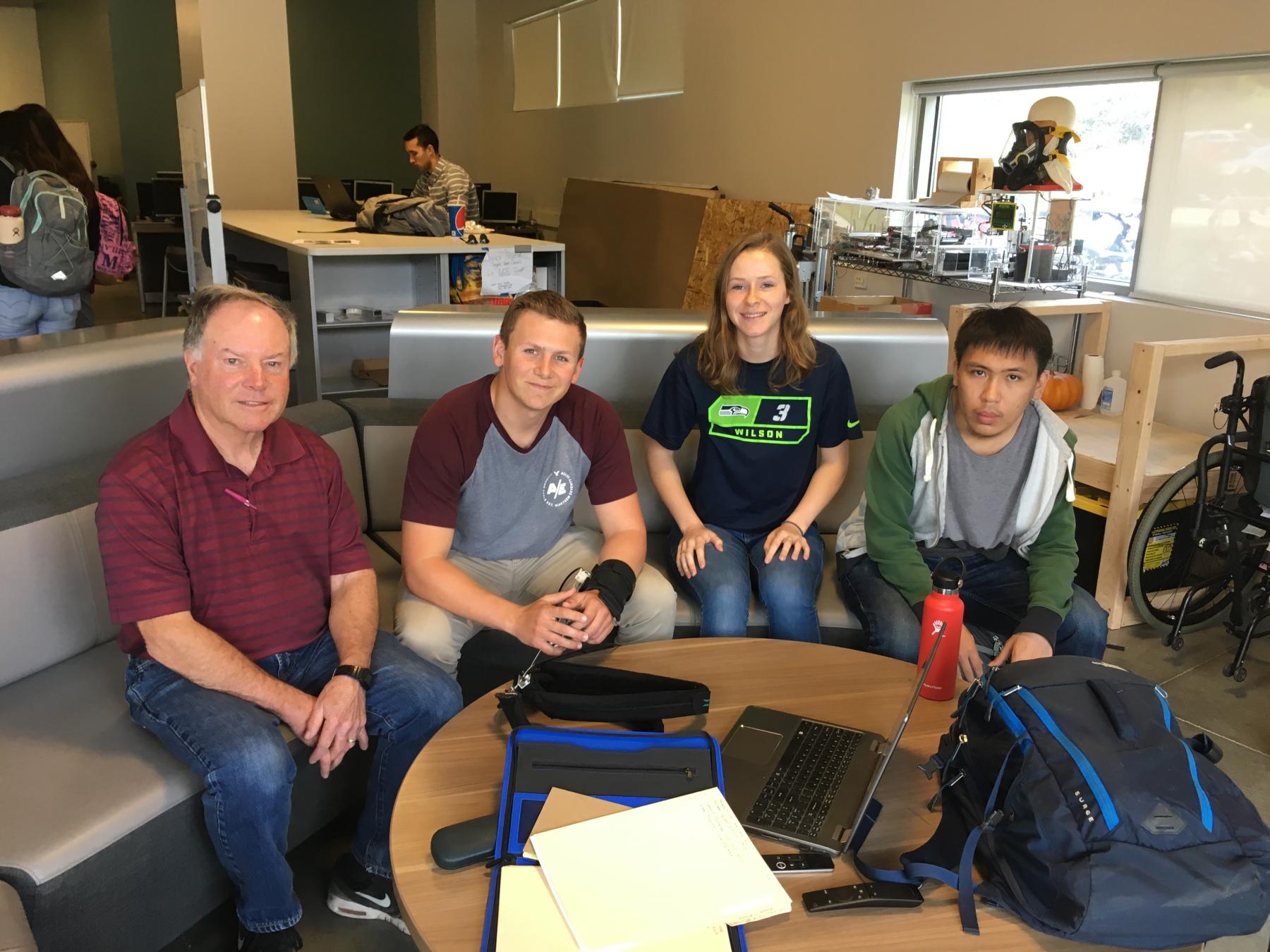 The final design features shoulder strap actuation, a double hook gripping mechanism, and a wrist gauntlet to connect the pieces.  It features a flex-to-open design that actuates a double hook terminal device through a cable.  The cable is attached to a steel bracket on the back of the harness; when the user flexes his shoulders the cable pulls on one end of the terminal device and opens it, allowing the user to grab an object.

The terminal device is a prefabricated hook that can be opened when a force acts upon the extension sticking out of the hook’s right side.  This force actuation will be done with a cable attached to the harness.  The hook itself is kept closed by several elastic rings, which provide the clamping force needed to grip objects.  During testing, it was found that the hook by itself did not have enough surface area to properly grip the magazines; light shaking caused the magazine to rotate within the grip.  To alleviate this problem, neoprene sleeves were created as removable attachments to the hook; the neoprene provides more surface area to contact the object as well as the ability of the material to deform and contour to the shape of the object.  These features create a more secure grip than the bare metal hooks do.  Rubber, neoprene, and foam were all tested during the material selection process for the sleeves. Rubber was strong but too stiff to contour to the shape of the object.  Foam bent well to the shape of the object but was weak and susceptible to tear.  Neoprene was the intermediate material that was strong but also could contour to different shapes.

The harness was a prefabricated part that was then sent to SLO Sail and Canvas for modification.  Attached to the back of the harness are the steel brackets, which are riveted to the harness.  The cable is fixed to the right side bracket and is inside a sheath that is press-fitted into a channel on the left side bracket.  When the user flexes his shoulders to increase the distance between the brackets, the cable will pull on the terminal device and open it.  The harness also includes an adjustable front clip, which was added to the harness by SLO Sail and Canvas.  During testing, it was found that without this clip, brackets on the harness would slip down the user’s back and make actuating the cable difficult. 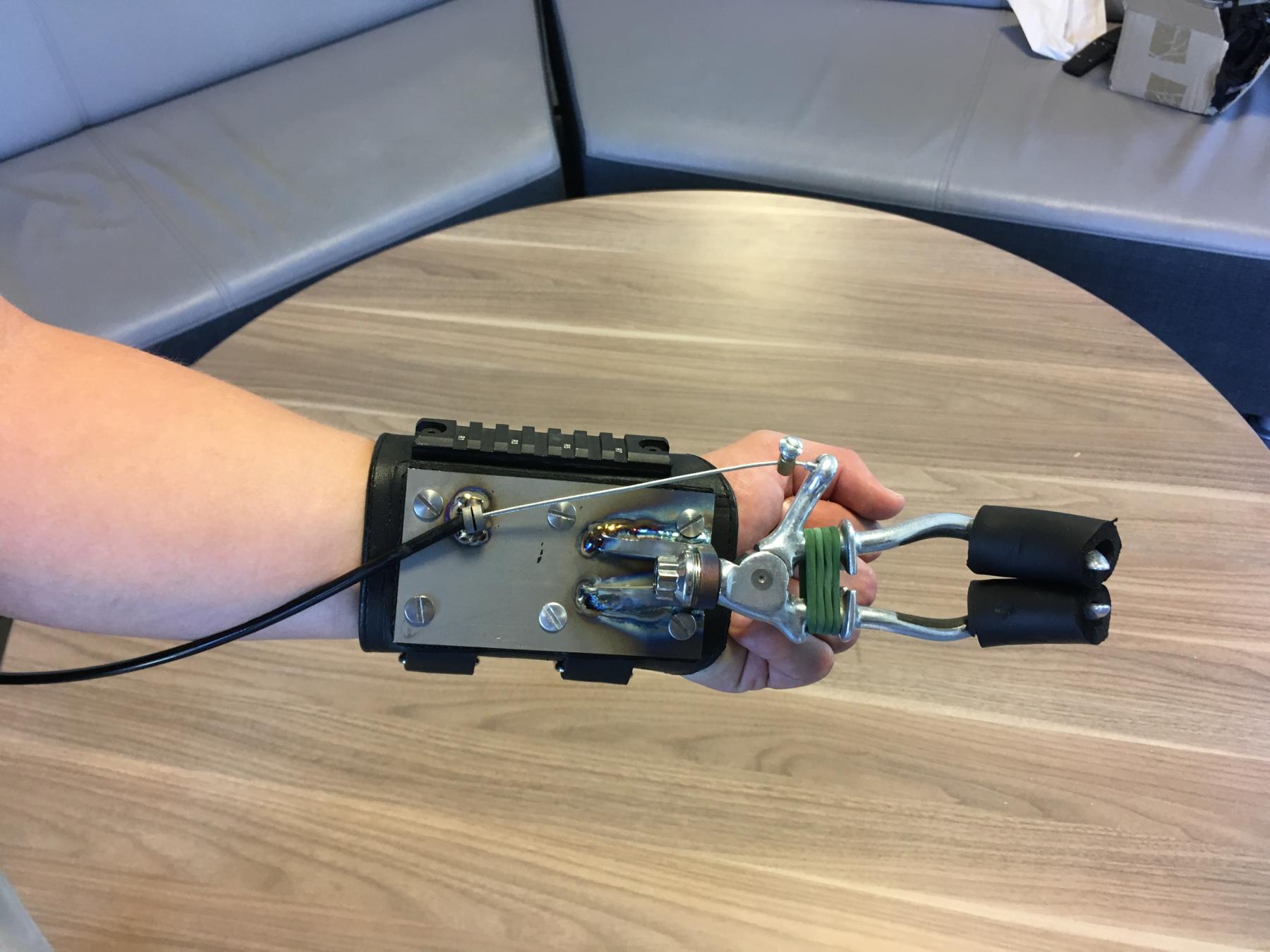 Our Challenger can use this device in his task of training other military personnel by donning the system, then through shoulder flexion can open the grip located where his native left hand would be to grab magazines located either at his waist or chest.  He can manipulate the magazines to insert them into the firearm that he holds in his right hand.  The device was created for the purpose of allowing him to train military personnel, although it is our hope is that he will find this device helpful in performing his daily tasks as wells as the tasks for his job.