QL+ Engineering Students from Cal Poly were challenged to design and create “soft socket shorties” for an Army Veteran named Jeremy.  “Soft Socket Shorties” are a slipper or minimalist running shoe-like product for bilateral above knee amputees.  QL+ Challenger Jeremy has been on nine deployments overseas.  After safely returning from deployment, Jeremy was hit by a drunk driver in his driveway while loading his truck for a fishing trip. The accident caused him to lose both his legs above the knee and part of his right hand.

Despite his injuries, Jeremy is very active.  His hobbies include competing in triathlons, hand cycling, fishing from the shore, and fishing from a boat. Currently, Jeremy uses a carbon fiber socket and has tried silicone liners and sockets to make them softer and more comfortable. Carbon fiber sockets are lightweight and sturdy. However, users experience discomfort after extended use due to their rigid surface. Silicon liners and socks help alleviate this problem, but they tend to roll or slide off and trap heat and sweat. This is particularly problematic because amputees have less body surface area for natural cooling, so the residuals tend to overheat. Many current sockets chafe the skin of the residual limb because of how they are attached to the body. 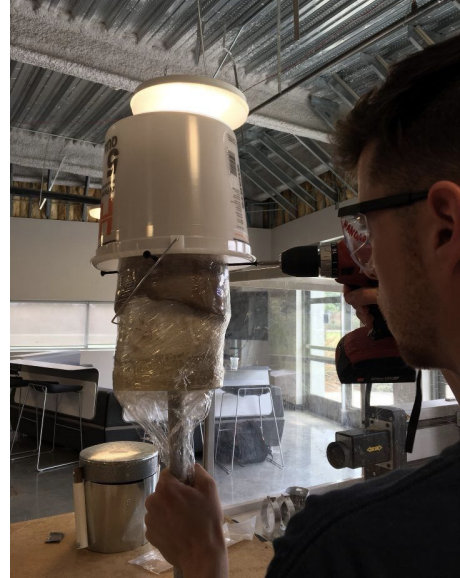 The goal of this project was to design a reliable, convenient, comfortable, lightweight, stable, and breathable soft socket “shorty” for the challenger to wear out for activities, such as walking, biking, swimming, boating, and resting, or after a long day wearing carbon fiber prosthetic sockets. Specifically, Jeremy hopes to use these shorties for the activities that he currently enjoys doing such as swimming, hand cycling, and boating. It was decided that the design of the prostheses needs to be short and joint-less to meet the stated objectives.

We are proud of their work!