For the last nine months, the Colorado School of Mines Prosthetic Arm Accessories team has been redesigning Taylor Morris’ current right arm prosthetic with the goal of increasing Taylor’s daily independence. This was accomplished through determination from Taylor by installing a pen, exacto knife, flashlight, laser pointer, and electric barbeque lighter into the arm. The design focus was to keep a low-profile, smooth outer surface prosthetic with all accessories contained inside the outer shell.  Additionally, all electric accessories will be tied into the arm’s current myo-electric battery powered system, giving Taylor confidence that his accessories will work as long as he follows his current habits and charges the arm at night. 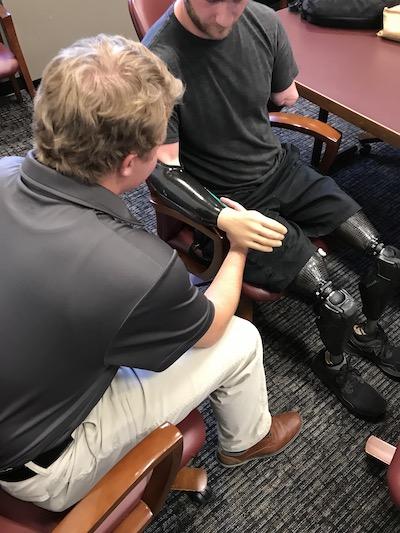 The team’s final design utilized updates from Intermediate testing which include adjusting switch profiles and textures as well as stabilizing the flexible pen and shortening the barbeque lighter. This final design has also closed out all prior risks that were previously low-level at the time of the Intermediate Design Review. Final electrical engineering designs and calculations were performed on the entire assembly, allowing the accessories and Taylor’s current myoelectric operating system to be completely intertwined. Manufacturing of the arm was completed with the help of Zach Harvey, CPO.

The team has completed a final product that includes a professionally manufactured carbon fiber shell that will fit Taylor, allowing him immediate implementation and use. All accessories were inserted into their respective switches and electrical systems. The prosthetic arms accessories team met all scheduled deliverables throughout the year, with no major delays.

The team recommends that the arm could be upgraded with more advanced technologies, which could prove to be a great future Senior Design Project. Overall, this project was a success and has led to a great product.