QL+ engineering students from Colorado School of Mines worked on various field and stream related projects.  This team tasked with designing and creating a shotgun mount that could be used to shoot trap, skeet, and hunt from a wheelchair.  The mount had to be designed to have the ability to support a majority of the weight of a shotgun and its recoil, move freely both laterally and vertically, and be adjustable for a variety of users and needs.

The two solutions currently used by Craig hospital are the Caldwell Deadshot and the LM-100 by Be Adaptive, costing $130 and $600 respectively.  The team recognized the cost of the LM-100 as an initial problem.  $600 is a lot of money for a person to pay for a piece of equipment that does not totally satisfy their needs.  The Caldwell Deadshot is much cheaper, but it is not specifically designed for shooting out of a shotgun. I ts intended design is a tree stand for deer hunting.

In October the team participated in a shooting outing at Valhalla with Craig Hospital and some of their patients.  This outing allowed the team to see the patients shoot both the LM-100 and Caldwell Deadshot.  The problem that stood out from the beginning of the day was the difficulty for a few of the patients to pull the trigger.  Some patients did not have the finger strength or dexterity to pull the trigger, so a string was tied to their wrist and then tied to the trigger. In theory, this would allow them to pull the trigger by just moving their arm backward.  The string did not work though between it falling off the trigger or the lack of tension in the line. It was a less than 50% effective solution.

Mobility was another issue the team noticed while watching.  Some of the patients had the ability to track the clay pigeons but many could solely shoot based on timing and had to leave the gun in one position.  The Caldwell Deadshot has square tubing that attaches to the base which turned into both a positive and a negative.  The square tubing gives it the ability to fit in the track chairs, but that was the only chair that it could be shot out of.  One patient did not want to shoot, because of the hassle of transferring from their wheelchair to the track chair.  At the conclusion of this outing, the team determined that the three major takeaways were: the challenge of pulling the trigger, the mobility of the two current designs, and lack of adaptiveness of the designs. 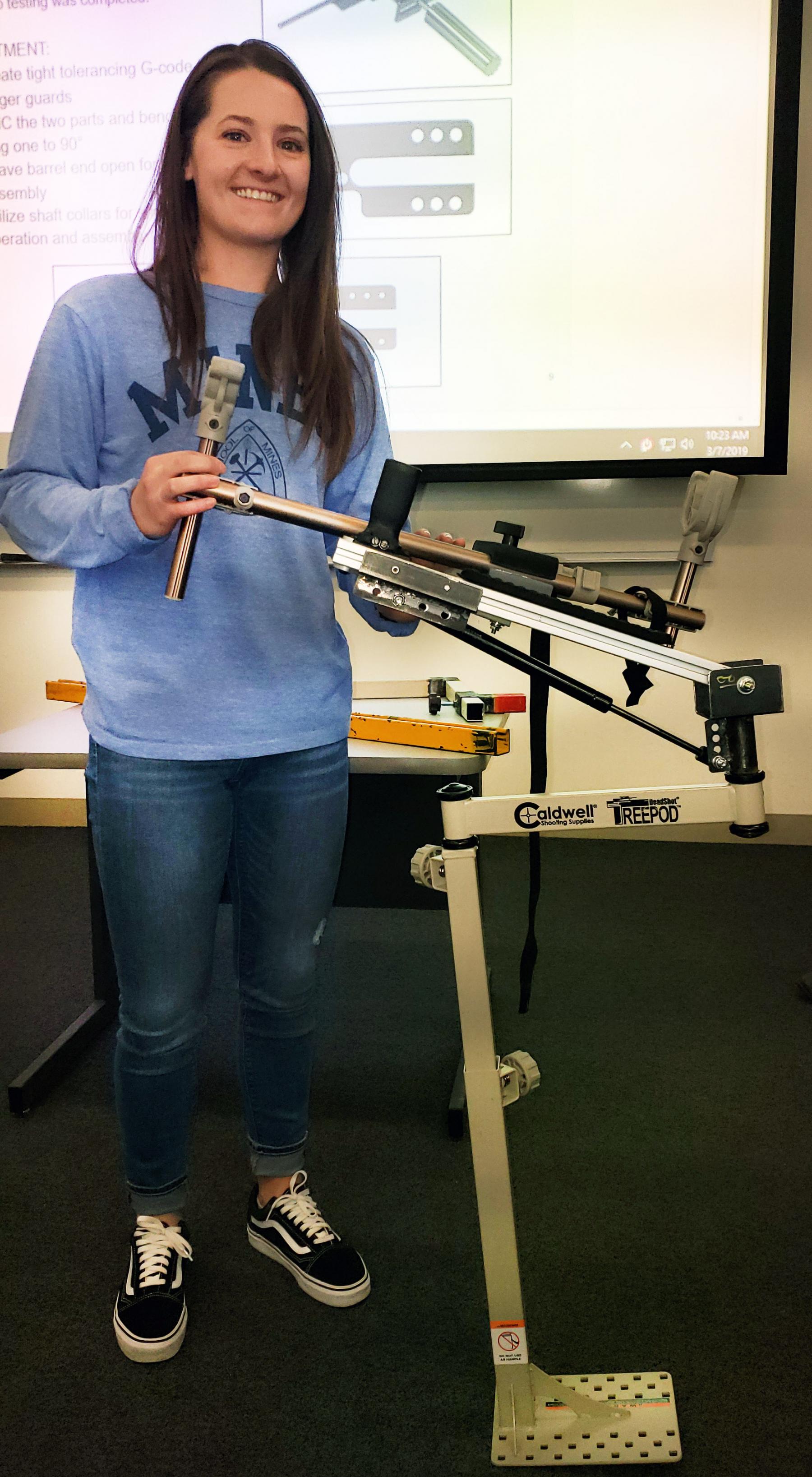 The team decided to design a cheaper, mobile, and more adaptable shotgun mount.  Looking at their options and the tools they had, they decided that using the base of the Caldwell and the piece that holds the shotgun would be the most financially viable option.  The Caldwell base fits in the track chairs and has the lateral movement bushings we need.  From the LM-100, the patients and the team strongly liked the shock.  It took most of the weight off the gun and allowed the patients to more easily move the gun vertically, specifically upwards.  Taking these pieces from the current designs the team moved forward with designing ways to make adjustable.

The team decided to use 8020 for the arms of the mount due to 8020's adjustability and ability to have pieces added on with a few screws.  With the skeleton of the model complete, the team created a U joint to connect the 8020 to the Caldwell, as well as a connector between the gun holder and the 8020.  The U joint was just square tubing that was cut and then welded to the Caldwell.  The connector at the gun holder was a 3D printed piece that enabled for 360 degrees of lateral movement for the gun holder.  Once the shotgun mount design was finalized, the team added the attachments.  There was an arm pad placed on the 8020 for comfortability, a Picatinny rail installed for grips, and another 3D printed piece for the gun holder for hand placement.

The second problem external to the actual mount was the limited access to track chairs. Thus, the team bought an aluminum metal plate and drilled holes into it so that a mount could be screwed into the plate.  The other end of the plate could slide onto a wheelchair.  This enables anyone at home to shoot at their own leisure and does not require someone to change wheelchairs to shoot.

Future improvements would be improving the pivot point of the shotgun. The current pivot point shifts the butt of the gun out of the shoulder when the gun is pointed at extreme vertical angles.