The Day We Fell Off The Planet

Kay Reyna grew up in a small, peaceful town in North Carolina—the kind of town where she knew all of her neighbors.  After high school, she majored in Christian Studies at Grand Canyon University and received a Masters’ Degree in the same, with an emphasis on Christian Leadership.

Kay married her high school sweetheart, Humberto.  This year, they will celebrate their 29th wedding anniversary!  Kay and Humberto have three children—a son and two daughters, three dogs and a bird.  Kay worked for the local school district in accounting and Humberto worked as a North Carolina State Trooper.  “We were always a very close-knit family and spent all of our time together, just doing normal things,” she states, “Now I know that I shouldn’t have taken that time for granted.” 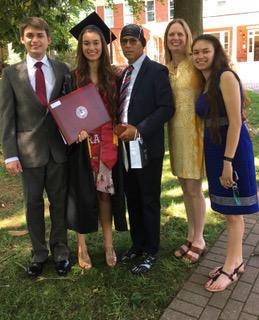 She had just arrived at work when she was informed that Humberto had been involved in a collision.  The caller told her that they were still working on extricating him from his patrol car and that he would be transported to a local trauma center.  This is all she knew.  She had no idea what condition he was in or what had happened to him.  When the accident occurred, Kay and Humberto had been married for twenty years.

Later, Kay learned that at the time of the accident, Humberto was investigating a collision on the interstate.  Another vehicle rear-ended his patrol car while he was inside it.  The vehicle was traveling 75 MPH.  The force of the crash was so severe that the trunk of his patrol car was pressed into the back seat.  The force also caused his patrol car to spin out into the other traffic lanes.

After the accident, the Reyna Family’s lives completely changed.  “I often say we fell off the planet,” she explains, “The man that walked out of the house that morning did not return home the same.  Everything changed.”  As a result of the collision, Humberto has been diagnosed with the following:  Traumatic Brain Injury; Post-concussive Syndrome; Post-traumatic Stress Disorder; personality changes; sensory changes in his right hand; orthopedic issues in both shoulders; Dementia; Depression; Anxiety; Attention Deficit Disorder; cervical pain; Myofascial Pain Syndrome; Hyperacusis; Binocular Dysfunction; and, Oculomotor Dysfunction.

Humberto was a wonderful father and husband.  Kay remembers Humberto always spending time with the kids and noting that if he was home, at least one of their children was sitting in his lap.  Kay states, “I loved my husband so much that when he walked into the room, my heart would skip a beat, even after twenty years of marriage!”

Now, Humberto requires 24/7 care and supervision.  The love Kay felt for him before the accident has not diminished.  However, she does feel a profound sense of loss.  “I miss him so much.  I don’t know how to explain that because some people don’t understand what happens when someone suffers a brain injury.”  For over eight years, Kay has been Humberto’s caregiver, 24/7.  She is trying to help him rebuild a new life and give him hope and a purpose.  “Humberto has the right to live the best life he can, even though he requires help to live it.” 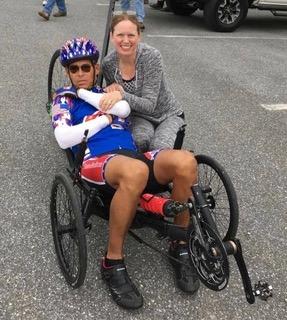 Humberto’s injuries make being in public places very difficult for him.  Because of this, Kay and Humberto lead very isolated lives.  This takes a toll on Kay, who was used to interacting with and enjoying the company of others.  Per doctor’s orders, Humberto participates in adaptive sports.  This gives Humberto and Kay time away from the house.  Humberto can participate in specific adaptive sports programs with his brain injuries, but Kay is there to assist him.  She knows when to remove Humberto from the events when his injuries are getting the best of him.

Humberto is working with QL+ engineering students at Colorado School of Mines on a device to help him deal with his hypersensitive hearing.  The brain injury he suffered in the collision makes his hearing super sensitive—noise is unbearable to him.  Kay believes that this device could have a significant impact on Humberto’s life and the lives of their entire family.  “Just to be able to go out in public without the impact of overpowering noise would allow him to lead a better quality of life,” she adds, “If he could participate in normal, everyday life again, it would be a huge blessing.”

In Kay’s experience, there are few resources available for injured police officers.  “I am grateful for QL+ for allowing first responders to participate in the program and receive help and support.  Injured first responders are desperate for it,” she states, “Thank you, QL+ for answering the call to help them.”