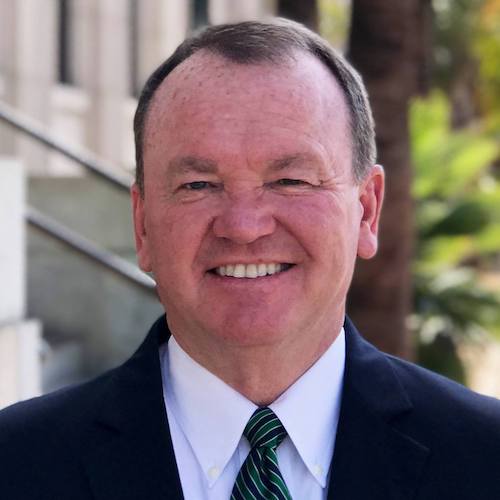 Jim McDonnell began his law enforcement career in 1981 after graduating from the Los Angeles Police Academy.  He served for 29 years at the Los Angeles Police Department. During his tenure as second-in-command under Chief of Police Bill Bratton, the City of Los Angeles experienced some of its deepest drops in crime in all of its history. Following his career at the LAPD, McDonnell served as the Chief of the Long Beach Police Department for five years.

​ In 2014, Jim McDonnell was elected Sheriff of Los Angeles County and was the first Sheriff in 100 years to be elected from outside the Sheriff's Department.  During Sheriff McDonnell's term, there was a reduction in serious use of force inside jails and correctional facilities. Sheriff McDonnell supported the creation of the first Civilian Oversight Board to build greater accountability and increased communication with our diverse communities. He also created the Human Trafficking Bureau to address the victimization of young women, girls, and boys. Crime was also reduced across the county by empowering the community to work more closely with deputies.

​ Sheriff McDonnell holds a Bachelor of Science degree in Criminal Justice from St. Anselm College in Manchester, New Hampshire and a Master’s Degree in Public Administration from the University of Southern California. He is also a graduate of the Federal Bureau of Investigation’s National Executive Institute and has completed executive education programs at Harvard’s Kennedy School of Government.